A year later I’m still somewhat recovering after graduating from the program in positive psychology. The program is academically intense – a full-time executive graduate program on top of my normal life. Additionally, it was also personally intense as we were led on a personal journey where our views of life and self were forever changed. The sense of commune was also unlike I had ever experienced.

Coming back to the real world was a bit of a shock. Not only did I have free time again – what do I do with it now? – but I now view my old life with fresh eyes.   The same landscape seems richer somehow. The old insults and injuries are still there but not so daunting. My work has taken on a new dimension. My loved ones feel ever more part of me. Even going to the gym feels different but partly because my body has made an undeniable shift while I spent the year studying instead of working out.

Being in that program felt akin to being in Oz. It’s not real. After all, it’s an academic program of limited duration, with a class that was cloistered one weekend at a time among the most interesting faculty and topics you could ever imagine. You feel like you’re surrounded by unicorns and talking lions, and anything is possible. You face the ugly witches (your own) but feel surrounded by your best friends. You know it must end and you eventually will go home.

I wouldn’t say that my reality upon my return went from black and white to Technicolor, but it did in the sense that I’m now acutely aware of a dimension that had previously escaped my attention. That dimension, the relationship between the quality of my existence and my perspective and choices in life, adds an element that essentially puts a shiny halo on what was previously the mundane.

And like Dorothy, I don’t really want to be in Oz anymore. After all, the real world is so much more magical than I’ve ever imagined. I also know that I don’t need ruby slippers to find or create magic. Oz is inside and all around us, ready to be tapped at our command. We just need the courage and openness to find and create it in unexpected places. 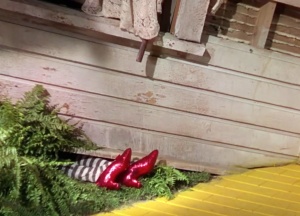